Official statement of Ukrainian President on April 22 is the beginning for persecution of antifascists in Ukraine? 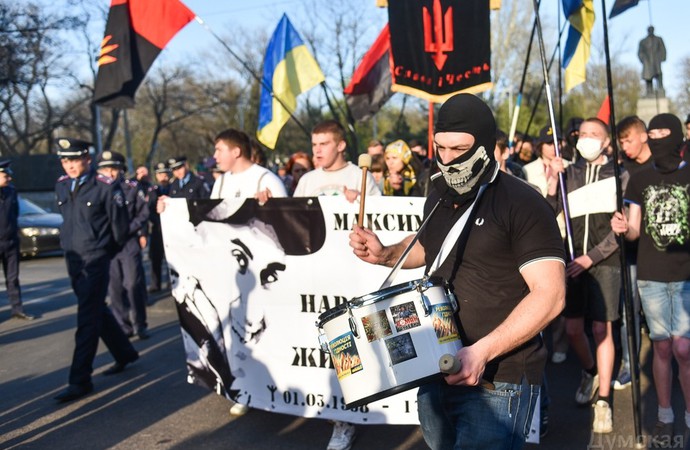 On April 22 the president of Ukraine Viktor Yushchenko made an official statement that there is «an extremist organisation “Antifa”» in Ukraine and demanded from SBU (Ukraine Security Service) – «to check all the information concerning coordination of its activity by the foreign anti-Ukrainian organizations». This is an exceptional incident: the president points out to the law enforcing services that there are extremists in Ukraine, names them, and insinuates who their real organizers and patrons are.

But where the president got such information?

On April 17, in Odesa during the skirmish between ultra-rights and antifascists one of the far rights (Maksim Chaika) had been injured and later died. In spite of the evidence that ultra-rights attacked a smaller group of antifascists, who simply defended themselves, nobody – neither journalists, nor politicians – have used the term “self-defense”. Instead antifascists were labeled as “pro-Russia militants”, who consciously killed “an activist of patriotic civic association” (mass-media statement). The attack of one side and self-defense of the others have become an instrument of political PR for those who want to use this tragedy to gain certain points or to eliminate opponents.

The president’s statement was the culmination. From his words we got to know about the organization “Antifa”, which is extremist and which, of course, is coordinated from the hostile ‘foreign centers’. Nevertheless, “antifa” is not an organization but a network movement; not Ukrainian or Anti-Ukrainian but worldwide; and, of course, the president has not produced any proofs. And what do we know about another side of the skirmish?

The deceased Maksim Chaika was a leader of Odesa far rights, member of the organization “SICH” (“Glory and Honor”) and a football fan of FC “Chornomorets”. Partly because of “Chornomorets” fans the city of Odesa periodically appears in human rights monitoring reports concerning racial or national hate crimes. We mean not only vandalism on Jewish cemetery but also attacks with human victims. In the last few days many Internet-users have received access to photo and video materials confirming that force, which attackers of April 17 belong to, is not just “patriotic”. In particular we could see so called ‘roman’ (Nazi) salutes, Nazi symbols, stories about participating in “actions” against “foreigners”.

“SICH” civic association, which Maksim Chaika belonged to, is a member of so called ‘Social-nationalist assembly’ together with the odious “Patriot of Ukraine” association. Materials published both on the “Assembly” and “Patriot of Ukraine” web-sites leave no doubts in neo-fascist and paramilitary character of these organizations. But the president Yushchenko, in spite of the stated above, has decided to choose young antifascists as a target, relying on the invalid data from prejudiced politicians.

In the last few days it was repeatedly mentioned that inquiry has got a video record of the attack on April 17. We are afraid that this record could be destroyed, in particular, because of the political pressure – its content contradicts to the Nazi-attackers version. Not to let this happen, we publicly announce our anxiety and demand to save the record.

We are receiving information about use of pressure on the witnesses by the law enforcement officials – both psychological and physical – only to purpose testimonies corresponding to the attackers’ version.

Events in Odesa could light up the fact that youth fascism in Ukraine has existed long ago, as well as confrontation between activists of far right and antifascist movements. Instead, we see politicized hysteria which only disgraces its participants.

We demand finding and investigation of the facts without any distortion, manipulation and pre-election persecution.