“Chayka Affair” Will Not Be Investigated Impartially – Antifascists 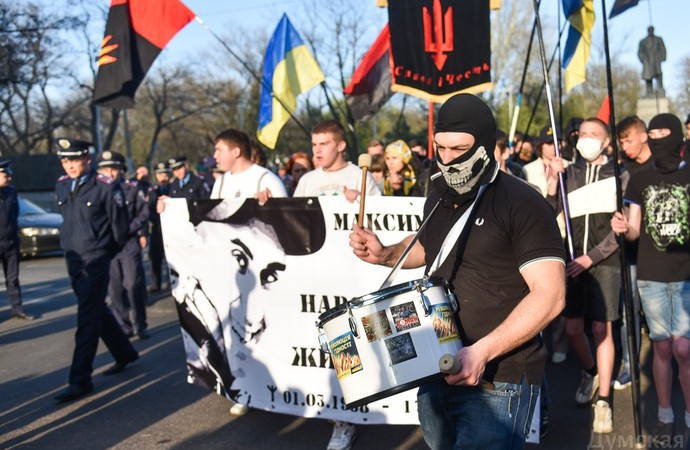 Antifascists and human rights activists consider Ukrainian President Viktor Yuschenko’s recent statement to be intended to manipulate the public opinion and pressurize the investigation. They said it on April 24 in Kiev.

On April 21 the President said he would personally monitor investigation of the death of Ukrainian neo-Nazi Maksim Chayka who was killed during the fight between the far-right extremists and antifascists in Odessa.

“We really doubt that the inquest will be impartial and unbiased now, after the intervention of the President of State”, said Vladimir Chemeris from Respublika Institute, the human rights watchdog. He stressed that in the statement published by his press officer Iryna Vannikova, Mr. Yuschenko defined the incident as murder, not as self-defense.

“At the same time, the President proclaimed members of ‘Antifa’ organization – non-existent, by the way – to be extremists and ordered the law enforcement agencies to scrutinize political motives of the murder. Referring to the ‘racial purity’ advocates as ‘patriots’, the President shows his sympathy with Nazi”, Mr. Chemeris said. He also added that Mr. Yuschenko’s theses “are almost fully coherent with stance of the Nazi organizations ‘Patriot Ukrainy’ (Patriot of Ukraine), ‘Bratstvo’ (Brotherhood), and ‘Svoboda’ (Freedom)”.

Members of the Antifa movement said that the activist of the far-right radical organization ‘Sich’ Maksim Chayka was lethally wounded as a result of the necessary self-defense of the antifascists. Yuriy Lebedev from the ‘Antifashystska diya’ (Antifascist action) movement underlined that the incident happened after 15 neo-Nazis had attacked 5 antifascists. Police must have the CCTV video record which can prove it. “Antifa had no doubts about the far-right’s aggressiveness. Statistical data on hate crimes including murders shows the threat of Nazi in the streets”, he said.

Vitaliy Dudin from the ‘Sotsialna alternatyva’ (Social Alternative) movement said that Ukrainian President wrongly defined ‘Antifa’ as pro-Russian extremist movement. “Antifa is not an organization, it’s the global union of men and women opposed to Nazism among the youth. As advocates of interracial equality and solidarity, we are the direct opposite of the Nazis”, he stressed. Mr. Dudin added that “now Nazis are playing victims, but before this incident they always stressed their militancy”. Antifascists also reject the accusations of “pro-Russian” orientation: they remind that in Russia, as well as elsewhere in Europe, there are Antifa who often engage in conflicts with authorities.

Speakers also provided proofs that ‘Sich’ is a radical Right organization. It is a member of the so-called ‘Social-national assembly’ which propagates racism. Views of the late Maksim Chayka are explained by himself in a video record which recently appeared on the internet.

The press conference was also attended by the antifascist from Kiev who had fallen victim of Odessa criminal police. On April 22 he was detained and taken from home to Odessa for interrogation during which he was beaten and received spine trauma. He was finally released with no money or documents in a city 500 km away from home. He was detained because he had personally known Odessa antifascists who had taken part in the fight on April 17. He promised to appeal against the actions of the police.

Meanwhile, antifascists from all regions of Ukraine expect repressions from the authorities.