Science, Crimea and prison bars: persecution of teachers and researchers

The use of science and education for political purposes in Ukraine has become the norm. How has it happened and why is it a terrifying trend?

The conference in Yalta

For Ukrainian teachers, participation in a scientific event in Crimea resulted in dismissals and monitoring by The Security Service of Ukraine (SSU). The annual international applied science conference on Russian language in the multicultural world was held for the tenth time in Yalta on 8 – 11 June, and brought together teachers and researchers from 10 countries, including Ukraine.

A post on Facebook from a journalist of a popular TV channel (July 24) launched a flurry of accusations and criticism in media towards several Ukrainian teachers. It was caused by the fact that these teachers participated in a conference held in Crimea 1, and signed a resolution by which the participants thanked the local and Russian government, as well as members of the organizing committee.

However, little attention was brought to the fact that the conference has been conducted annually (since 2007) with the help of both Ukrainian and Russian officials and representatives of academic community, and with no apparent side effects. The 2016 conference was quite scientific and did not differ much from previous events. The conference program had no mentions of politics. The speeches only touched upon the topical issues of linguistic Russian studies, sociolinguistics, and medialinguistics; teaching Russian as a native and foreign language, and so on.

Even though the event was held in early June, the Ministry of Education and Science of Ukraine (MES) reacted only on July 26, shortly after the event gained publicity on Facebook and was picked up by the media. The Ministry addressed universities with a question why their teachers had participated in a conference in Crimea. 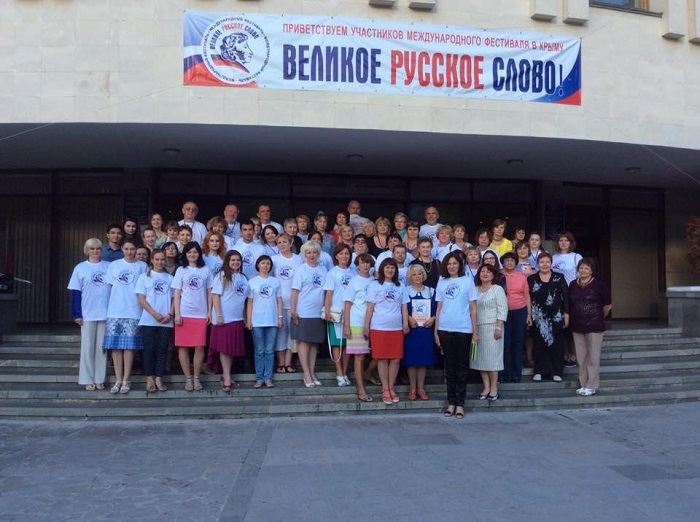 A photo from the conference

The following statement from the MES issued on July 28 stated that aforementioned academics had lost the moral right to teach and educate the younger generation of Ukrainian specialists and sided with the aggressor by supporting an anti-Ukrainian resolution of the event. It is important to mention that the “anti-Ukrainian” part of the resolution was the expression of gratitude for organizing the event, addressed to local government officials, which is a common practice in the EU countries. As noted in the statement, the MES required not only the dismissal of scientists in question, but also the assessment of their activities by the SSU and the Prosecutor-General’s office. Such actions were deemed necessary because, for the MES, the participation in a conference in Yalta, as well as any contact with educational institutions in Crimea, serves as acknowledgement of “Russian affiliation” of Crimea, and the MES “could not allow the implementation of aggressors’ plans”.

It is not the first time that the MES talks about morals. In 2014, Sergiy Kvit approached the local education authorities with the letter of the Ministry of Education and Science of Ukraine №1/9-382 from 29.07.2014 “On special responsibility of teachers and teaching staff”. This document states that, ‘by the article 41 of the Labor Code of Ukraine (LCU), for certain categories of employees, additional grounds are identified, on which they may be dismissed’. These ‘additional grounds’ is the article 41 of the LCU on the acts of indecency, which the former Minister of education calls ‘anti-state activities’ and ‘participation in organizing so-called “referendums” in Donetsk and Lugansk regions or direct participation in terrorist organizations of “DPR (Donetsk People’s Republic)”  and “LPR (Luhansk People’s Republic)”’. This letter has politicized the article of the LCU on the acts of indecency, de facto allowing schools and universities to use it for political reprisal, even though it is not the MES’s competence to interpret the term ‘act of indecency’.

The new Minister of Education Liliya Hrynevych went even further. She appealed to the SSU and the Prosecutor-General’s office with a plea to help organize the legal system so that further instances such as the attendance of a Crimean conference carried a proper responsibility.

But is there anything the SSU and the Prosecutor-General’s office can accuse the teachers of? Among Ukrainian participants of the conference, only Iryna Zaytseva was accused of pro-Russian attitude. As for other participants, no ‘anti-state’ activities were previously noted. Taking into account that this is the first time such accusations were made towards the participants, the academics could not have foretold the consequences of participating in the annual event. The only thing they could be accused of is that they, who work in already isolated Ukrainian academic community, refused to terminate the contacts with their foreign colleagues.

Regardless of academics’ political views, using repressive measures against nonconformity/dissidence goes against human rights and academic freedom principles. This creates the conditions in which it is possible to punish anyone whose views or actions do not meet the ideological line or interests of the authorities and are subjectively interpreted by someone as an “anti-Ukrainian” position. For example, participation in a scientific conference in Yalta is considered ‘anti-Ukrainian’, whereas, according to Ukrainian legislation, Crimea has a free economic zone for Ukrainian businesses, and Russia and Ukraine sign state treaties on energy trade.

Politicization of education and science as a trend

Even though it is hard to imagine science or education that are free of politics, the previous Minister of Education Sergiy Kvit has opened new ways of using education and science as instruments of political propaganda and repressions.

Over the past two years national-patriotic education has been actively implemented on different education levels. The MES has gone from scattered and indirect implementing of elements of nationalist ideology in the educational process to direct instructions on how to bring up patriots that are willing to give their lives for the interests of the ruling class. 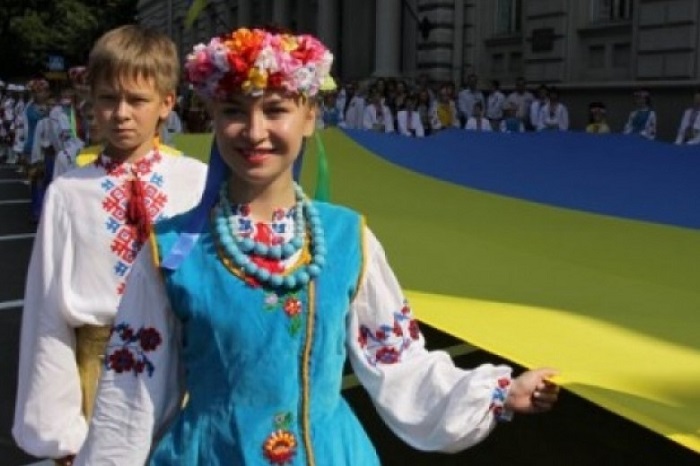 Often the attitudes of teachers, academics and students, which go against those of the authorities, get repressed. What is more, similar situations get gradually normalized in society and do not cause surprise or attempts to resist – like the previous cases, repression of the teachers that attended the Crimean conference did not cause any significant disturbance.

The teachers and scientists who found themselves in DPR and LPR received a heavy blow, as the MES has reacted to the situation in the East by urging them to move to the territories controlled by the government and threatening to revoke their academic ranks in case of their support of the separatists.

The purges of the ‘unreliable’ also happen on the territories controlled by Ukrainian. Currently it is not common practice to dismiss teachers because of their political views; it usually happens ‘by mutual agreement’, as there are no legal grounds for such dismissals in current legislation.

In addition, there is direct or indirect pressure to terminate all contact with Luhansk, Donetsk and, of course, Russian academic circles. Ukrainian scientists, who dare to keep those connections, have to go through condemnation in the media and reprimands from the MES.

A rather dismal case of limiting the scientific networks happened early last year. The MES encouraged Ukrainian scientists to boycott the competition of three-way German, Russian and Ukrainian projects, offered by German fund ‘Volkswagen’. Later, in the summer of 2015, there was another scandal because the Kyiv branch of the Moscow Institute of Physics and Technology (MIPT), while being a part of the Physics-Technical Learning-Scientific Centre of the National Academy of Sciences of Ukraine (PTLSC NASU), announced new admission to study at the MIPT. Needless to say that MIPT is among world leaders in the field of technology, and a chance to study there would be great for Ukrainian students. Nevertheless, the MES accused the NASU of encouraging brain drain to the ‘former imperial capital’, which is harmful for Ukrainian science. On the other hand, brain drain to the EU and USA is encouraged by our officials. They ignore the fact, that the cause of this process is not only external (higher level of education and working conditions for scientists abroad), but also internal: students and scientists migrate abroad, even knowing that no one is waiting for them with open arms, just because the basic conditions for quality education and scientific work are on the downward path.

The latest dismissals and prosecution of Russian language teachers who attended the conference in Yalta once again proved that the government has set a course for preventing communication between Ukrainian and Russian scientific circles.

Even though the MES pushes the Ukrainian academia towards establishing connections with Western colleagues, i. e. through the rules of obtaining scientific degrees, only a small amount of academics will get such opportunity. And the reason is not only a low level of skills of our scientists, but also the lack of material support for their work: the lack of access to advanced academic literature in libraries, lack (or non-transparent distribution) of funding in Ukrainian universities for participation in international conferences or inviting Western colleagues to Ukraine. It is pointless to expect that scientists would be able to afford buying ‎€ 50 books every month and paying for trips to conferences, as well as for visas. The wall between the Ukrainian and international academia will not disappear, as MES’s requirements alone are not enough; it is important to create favourable conditions, for example, to provide every researcher with a budget for academic travels, or encourage internships and exchanges with salary raises for the period spent abroad, which is a common European practice. Under conditions of a very low level of internationalization of Ukrainian science, its isolation from the West and repressions for maintaining links with scientists in Russia, Ukraine will remain completely isolated.

Where are we going?

The conflict in the East 2combined with the economic crisis (the dismissal of civil servants, the fall of the hryvnia, rising prices for basic goods and services) will further reduce confidence in the leaders of the country and fuel the discontent and protest moods of the population. To avoid such consequences, the political elite resorts to ideological and sometimes even repressive influence. Among others in the system of science and education, the ‘right’ characters have to perform this function, while the ‘wrong’ ones are pointedly repressed. This occurrence is not only relevant for Ukraine, but is a rather common thing for an undemocratic regime.

In order to avoid the Turkish experience of mass dismissals to ‘save democracy’ or American experience of hunting ‘communist’ spies, repressions in favour of any flag, be it Ukrainian or Russian, should not be allowed, especially in the academic sphere. Instead, science and education can be the grounds for understanding, dialogue and forming the common interpretation of the present and the past for healthy coexistence in future. This seems like a good thing for government officials to think about. The only thing we can do now is stand up to using repressive methods by the Ukrainian government in the fight for dominance of pro-government ideology.