Twenty years after the wall fell 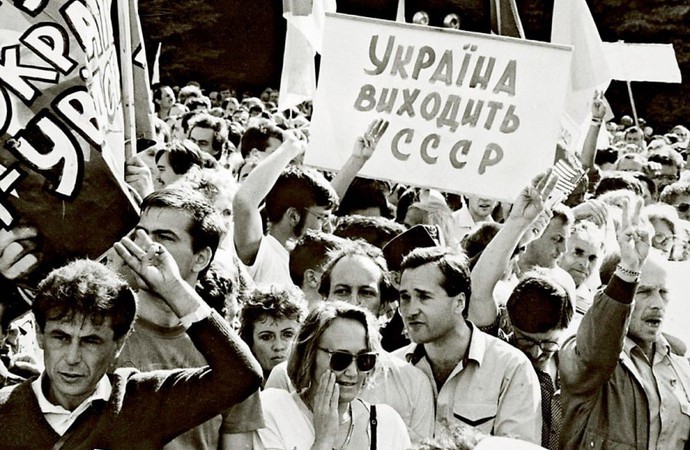 One of our editors, Volodymyr Ishchenko, interviewed by British newspaper “The Commune”

What was the society that existed before 1989-91, and was its collapse the historic victory of capitalism over communism?

There are a lot of rather boring discussions in the left-wing movement on “class nature” of USSR, whether it was “state capitalism”, a “degenerated workers’ state” or anything of this kind. Often a specific position on this question becomes a basis for founding political organisations and sectarian rivalry; often such discussions substitute for the real political actions necessary here and now. This is not to ignore this discussion at all, but to point out that it is not so important what exactly we call the Soviet society but what we think should and could have been done to improve it.

Was revolutionary action necessary or was it possible to push the Soviet nomenklatura to some progressive reforms? The answer to this question largely determines our attitude to the 1989 protests. With hindsight we can say that the 1990s neoliberal reforms were disastrous for the Ukrainian economy, culture and society in general. But should we consider the 1989 mass protests as just legitimating cover for privatising property by the part of the old Soviet elite? I would say no. Many people in Ukraine and in the USSR in general genuinely aspired towards some kind of democratic socialism with a “human face”, some even for a self-governing, libertarian socialism.

The Confederation of Anarcho-syndicalists was not a small organisation in the end of 1980s and the first title of the People’s Movement of Ukraine (Narodnyi Rukh Ukrainy) was People’s Movement of Ukraine for Perestroika [restructuring]. It was a strategic mistake by this popular wing of the 1989 events that they were closely allied with the so called “democratic” part of the split nomenklatura.

But many – even great – revolutions were defeated because of the lack of independent revolutionary organisations and we cannot disdain them for this. 1989 was a victory and a defeat at the same time: the victory of the emerging elite of a peripheral capitalist society and a defeat of the movement for genuine socialism. It would be absurd to call what we have now in Ukraine “western-style capitalism”. It is not “western-style” but it is becoming more and more similar to colonial-style, Third World capitalism with huge inequalities, the predominance of low surplus-value export production and mass migration from impoverished regions to wealthier countries. But we should also understand that the basis for this was laid down much earlier in the Brezhnev period when the USSR integrated to the world economy primarily as a supplier of natural resources.

Did the ‘Orange Revolution’ represent the continuation of the struggles of 1989-91?

For nationalists and liberals obviously “yes”. They can symbolically connect the celebration of national identity and confirmation of their pro-Western orientation between 1989 and 2004. But, of course, this is not true for the left. In contrast to the 1989 movement the “Orange Revolution” did not include any significant and meaningful discussion of substantial reforms in Ukraine. The people were destined only to shout “Yushchenko! Yushchenko!” at Maidan.

What is the current situation of the Ukrainian working class and the prospects for the labour movement?

And, of course, the “Orange Revolution” in no way reduced class exploitation. On the contrary, the new Labour Code which was adopted in the first reading in the Ukrainian parliament gets rid of many important rights inherited from the Soviet time and fixes the new balance of forces between labour and capital (to the benefit of the latter). In the same time we see new independent trade unions emerging and the radicalisation of workers’ struggle. This February workers of Kherson Engineering Plant occupied the factory in protest at huge wage arrears and the closure of the enterprise. This was the first occupation in post-Soviet Ukraine. The struggle in Kherson ended this September when the state forced the Kherson plant owner to pay the arrears and to to hire back half of the staff.

Many on the western left view America as the main imperialist power to be opposed, do you think Russia is also imperialist? How do you think the left in the West should relate to Russia?

Of course, instances of anti-American and “patriotic” rhetoric should not deceive the left. Definitely Putin’s Russia cannot be viewed as any kind of progressive or anti-imperialist regime even of the Chavez or Morales type. The Russian oligarchic elite is quite well embedded in transnational ruling class networks whilst revenues from natural resources export are not spent on education, public health or any kind of social infrastructure. Instead, Putin continued with neoliberal reforms reducing labour rights in the new Labour Code, privatizing housing and the public sector. But at the same time Russia should not be demonized. In the same way as nationalist rhetoric is used in Russia for ruling class legitimacy, an opposing nationalist rhetoric is used in Ukraine shifting responsibility for all problems to Russia’s hostile policies and its “fifth column” in Ukraine. Appeals to Russian imperialism as the most dangerous threat for the Ukrainian nation has become a common way to justify even neofascist movements. It became clear when ultra-right activist Maksim Chaika was killed in Odessa this spring. Many mainstream journalists and even president Yushchenko himself presented him just as a “patriot”. Antifascists at the same time were deceitfully presented as “pro-Russian paramilitaries”

What dissident left existed during the Soviet era, and what are the prospects for the post-Stalinist left today?

We can be highly sympathetic to the Ukrainian vernacular socialist tradition but we cannot ignore the fact that Ukraine has greatly changed since 1900-1920s. This is the most important reason why we did not see the resurrection of a mass national communist movement in post-Soviet Ukraine. Ukraine is not anymore a predominantly peasant country. Ukrainian national identity now appeals to only roughly half of Ukraine (the Western and Central regions) and in these regions it was taken over by right-wing nationalists since World War II. We can take some important insights from Ukrainian Marxists about the past but we cannot copy their analysis, rhetoric and action if we are striking for mass working class support not limited to certain regions and subcultures.

This is true not only for the Ukrainian Marxist tradition but for other more internationally recognized left-wing schools of thought. The left has to reconstruct and develop its theory in close connection with emerging grassroots movements: working-class, urban, environmental… The left’s theory should be once again re-connected to practical mass struggle. The problems of grassroots movements’ strategy, organization and mobilization should be the primary issues for the left. Only in discussing and solving practical problems of progressive social change can we develop our theory further, making it more adequate to the task of changing objective reality. Another problem is that the Ukrainian left should be more aware and connected to debates and struggles in global anticapitalist movements, learning its lessons and taking on inspiring examples and models of organisation.

I do not dare to give exhaustive definitions of what real communism could mean today. But what is most important is that real communism now must be with the masses and for the masses. It is definitely not another subculture or chat room for a handful of freaks pretending to be a “real vanguard” just because they have read a few more 100 or 150-year-old books.