Ukrainian protesters must make a decisive break with the far right 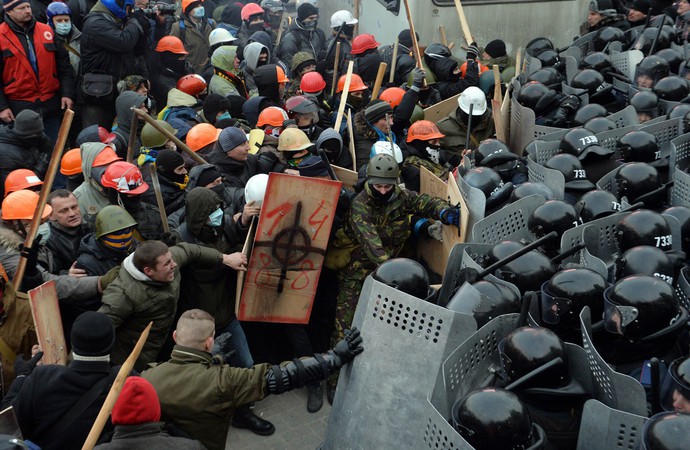 A number of well-known scholars on Ukrainian nationalism expressed their concern about, as they claimed, misrepresentation of Ukrainian protests by the international media unjustifiably over-emphasizing significance and centrality of the far right participation in a broad and diverse Euromaidan movement for the sake of empty sensationalism. Moreover, they point to a network of authors and institutions who may purposefully use such exaggerations to serve imperialist interests of Russia in Ukraine.

No doubts, appeals for a balanced and objective media coverage can never be irrelevant. However, academic experts, who are politically liberal in the same time, are turning the real problem upside down. All in all, it is not superficial and sensational media reports together with some possible Kremlin conspiracy which are discrediting Ukrainian protests. Euromaidan is discredited by the non-imagined far right wing of the protest. It is the origins of the problem, not the other way around, that must be addressed in the first place.

The recent interest to the Ukrainian nationalists followed almost total lack of attention to them. Before the start of full-fledged street violence on January 19 Western media were naively  celebrating ‘European values’ of the movement despite the far right xenophobic, homophobic, ethnic nationalist parliamentary ‘Svoboda’ party and even more extreme Right Sector were participating in Euromaidan almost from the very beginning. They were mainstreaming far right slogans, infiltrating self-defense militia, fighting with the police, leading occupations of administrative buildings and dismantling the monuments. Neither incidents of tortures, lynching and public humiliation of alleged thieves in the protesters camp, nor beatings of homeless and drunk people nearby did make it into the international media.

After the mass street violence started no pro-Russian conspiracy was necessary to lead the media interest to the more radical parts of the movement. There should have been some explanation found how a ‘peaceful’ and ‘democratic’ protest moved to the heavy violence. It may be debatable who was the first to start the fight with the police but it is hardly questionable that without organized and experienced Right Sector groups it would be able to develop to such a scale. After the failure of their previous attacks on the presidential administration on December 1 they were by far better prepared in January.

Indeed Maidan is a broad and diverse movement and the far rights are not numerically dominant there. However, the most decisive factor in the politics is not necessarily a numerical strength. The real problem is who exactly will lead those apolitical masses. Who will be able to win hegemony within the movement lacking any long-term strategy and broad vision of social change? Now neofascists have become normalized as a totally legitimate part of the movement, they have become heroes of the people’s struggle against authoritarianism and police brutality and they are gaining non-illusionary political points on the protests.

If the opposition wins in the parliament, ‘Svoboda’ will very much likely become a part of the new government gaining the highest possible cover for their violent militants and direct influence over the state policies. Previously marginal neofascists from the Right Sector have already become independent newsmakers and are making autonomous negotiations with Ukrainian law-enforcement bodies. They will be among the undisputable leaders of the more radical part of the movement who will not be satisfied with narrow rearrangement of powers to the parliament as demanded by the opposition.

In this respect the liberal scholars are taking politically naïve and irresponsible position. Besides, it is simply unconvincing to anyone outside of Euromaidan strong supporters . Despite all the rhetorics about ‘peaceful’, ‘democratic’ and ‘diverse’ movement and despite indeed repressive, violent and authoritarian government actions, police killings and kidnapping of people the half of Ukrainian population, skeptical to radical Ukrainian nationalism, still do not support Euromaidan. Meanwhile the Western governments are condemning violence from the both sides of the conflict and are hesitant to back up so called ‘people’s revolt’ pushing Ukrainian opposition to some compromise with Yanukovych.

If Ukrainian protest to end in something more than extending the powers of the opposition leadership at the expense of narrowing the president’s powers without any fundamental social-economic reform touching the most urgent needs of Ukrainian people, the Maidan movement must decisively break itself away from its far right wing. Instead of downplaying their participation and significance, instead of justifying and normalizing strategic cooperation with neofascists the progressive intellectuals must unclothe sharp contradictions of the seemingly non-conflictual diversity of the movement and attack the far rights as ever before, not those who dare to speak about the uneasy facts and dangerous tendencies.

See an abridged version of the article on Guardian

SUPPORT UKRAINIANS, BUT DO NOT LEGITIMIZE THE FAR-RIGHT AND DISCREDITED POLITICIANS! (Volodymyr Ishchenko)