Call for papers and contributions: the issue of Commons on Euromaidan 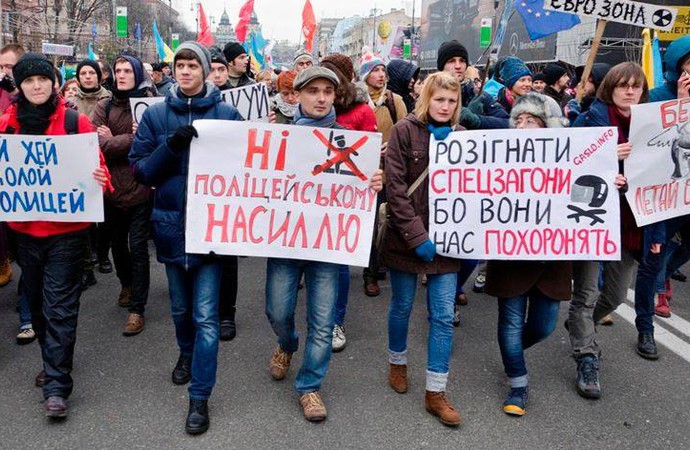 The editorial board of Commons: Journal of Social Criticism announces the beginning of the work on the next issue about Euromaidan and invites their readers to participate in it.

The protest phenomenon of (Euro)Maidan had some impact at the lives of a large lot of people in Ukraine and worldwide. At the same time, there is extremely little objective information and even less research on it. Unfortunately, for this reason, the discussions about hot and controversial problems of Maidan — its grassroots political agenda, the participation and influence of far-right in it, xenophobic and sexist rhetoric, etc. — are often based rather on the speakers’ own ideas and the corresponding social prejudice shared by them. As a result, the opinions on Maidan leans towards one of the two extremes: either complete apology as a “popular uprising” and turning a blind eye on its faults; or total demonization as an inherently “fascist” activity. Moreover, this framing of the debate suppresses any left perspective, since the opponents are more inclined to declare their pro- and anti-Western geopolitical positions than to speak in terms of social and class structure of the society.

In the next issue of Commons, we hope to escape this vicious circle of flouncing between the opposite opinions on Maidan and provide a leftist analysis of this phenomenon. To implement this project, we plan to engage authors from various environments: scientists and left activists, participants and sceptics of Maidan, people from Kyiv and other cities and countries. Thus, the issue will consist of texts supported by substantial argumentation, independent of geopolitical intrigues, about different aspects of Maidan; at the same time, the texts will have in common the left, emancipatory perspective.

The preconditions of Maidan:

The “dark side” of Maidan:

Maidans (and AntiMaidans) in different regions of Ukraine:

Maidan and the left:

Maidan in the international perspective;

If you want to write for us on any of these topics or suggest your own topic, please contact us at [email protected].