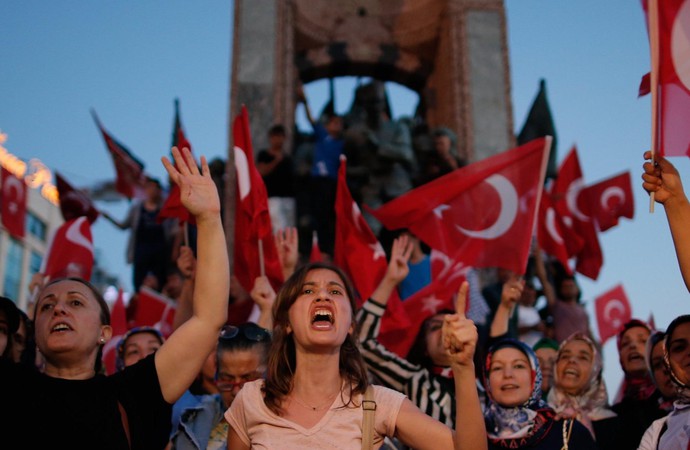 Shit hit the fan around 9 pm while we were sitting in one of the bars in Istiklal. With our Turkish friend, Vedat, we were discussing our Erasmus experiences or some other meaningless things. Difficult to remember now. We had an amazing view on the main Istanbul street full of shops, restaurants and tea places packed with tourists and middle-class locals even in the late evening. At some point we noticed people running along Istiklal, but in couple of seconds our attention was drawn to Vedat who after 5 minutes of being completely engaged with his phone told us:

– Something bad is happening, part of the military is trying to overthrow the government.

– YES, military coup. They took over the Bosfor bridge and Ataturk airport…

Our first thought was to get to a place with Internet access to read what is happening in English. And if it was not a joke, as it seemed at that moment, to tell our parents and friends that we are fine.

7 minutes walking and we are in a café reading The Guardian: it was not a joke or a misunderstanding. The shit was real. The Guardian said:

“It is correct that there was an attempt.” He (Turkish prime minister Binali Yıldırım) provided no further details but said Turkey would never allow any “initiative that would interrupt democracy”.

The idea that Turkish democracy is in danger made us just giggle, ‘cause we never heard about such a thing before.

While we were posting on Facebook and texting parents that we were fine, we saw through the glass window of the café two soldiers with huge guns walking along the street, people running, cafés and bars closing. And we knew that we were not fine, not fine at all, but it is the only thing you say to your loved ones and yourself in this kind of situation.

On our way home we had to pass through Taksim square. Several dozen soldiers were there. Soldiers with guns, not letting people cross the square and take the metro. You turn your face away in order not to look at them directly, but still trying to see what they were doing.

From Taksim we went down to the neighbourhood where we were staying. Lines at the cash machines, lines in shops, panic in the air. Being spoiled kids or just because of the panic reaction we stopped by a shop in a calm area to buy a bottle of Cola to mix with whiskey we brought from Ukraine. Maybe the woman who was in line before us buying just water and dried bread was way cleverer, but no other solution apart from getting a drink was coming to our minds at that moment.

We got home safe. There was no internet even before the events. Just jets with green lights in the sky. First part of the night was spent mixing whiskey with Cola and speculating about why, how and which international powers are involved. These conversations from time to time were interrupted by gossiping about ‘ex’es and imam’s calls for namazes and speeches, which would not happen on a normal day. The meaning of their words became another interesting topic for us to speculate about. This was the calm and even fun part of the night.

After we heard sounds of shootings and explosions, we decided to pack a bag with our passports, bank cards, the most decent clothes we could find for case of emergency. We could not find an English-Turkish dictionary in our friends’ huge library. Also we wrote down what would be the possible scenarios for us next morning from the most optimistic ones, like asking neighbours for a wifi, reading the news and calming down to asking neighbours for a wifi and checking how long it would take to walk to Greece. Even at that time we were aware that those pessimistic scenarios were unrealistic, but sounds of airplanes and explosions were against our rational thinking.

Being tremendously tired after 3 hours spent in line before passport control in the airport I (Vika) fell asleep. I (Alona) was less lucky, sounds of airplanes did not let me do so. I was lying in the bed and at some point when I realised that the sun was rising and I had no idea what we had to do that day and moreover that what were we gonna be doing does not depend on us in anyway, I started crying. Crying and crying. When I realised that it was a panic attack I managed to stop it and fell asleep. 1-2 hours of sleep were already more than what I expected.

We woke up, had coffees, put on the most decent clothes and went to knock on the neighbours’ doors to ask for a wifi. We got connected: messages to our families and friends, news. We just needed to stay in, even if for several days, we had water and food. We were FINE.

When we looked at the list of possible scenarios of our future written the night before, we laughed. Although everything turned out ‘well’, those airplanes, sounds of bombs and the almost sleepless night were just one more reminder for us in what kind of world we live in and that we are nothing in this world, small people without voice, freedom or agency. Feeling of being absolutely powerless in front of those who are drawing your destiny took over, because it is not you who are deciding what you are going to do or not to do in the morning, or the days after, where you are gonna be or not gonna be, if you are going to be safe or not. And these decisions are not taken only about lives of those 47 civilians killed last night in Turkey, they are also taken about lives of people in Syria and the East of Ukraine or Brussels and Paris. And you will not be able to participate in decision-making about your future unless you have political and military power almost always determined by the economic power. Not among the chosen ones – no control over your life and even understanding of what’s gonna happen to you today, if you are in the middle of a military coup; next month, if you are a precarious worker; or in 3 years, if you are doing your PhD.

Afternoon, 16th July: instead of conclusions

Now we are sitting and, as in the beginning of the story, reading The Guardian.

“The US president, Barack Obama, urged all parties in Turkey to back the “democratically elected” government, a clear denunciation of the attempted coup. In a similarly supportive statement, the EU’s three top officials – Jean-Claude Juncker, Federica Mogherini and Donald Tusk – said: “Turkey is a key partner for the European Union. The EU fully supports the democratically elected government, the institutions of the country and the rule of law. We call for a swift return to Turkey’s constitutional order.”

Seriously? Turkish democracy? What exactly do you mean by democracy? 301 miners killed in Soma just because safety of workers is not the priority when you need to extract as much coal as possible in order to run your business? Or maybe 6 000 olive trees felled overnight in Yirca in order to build a power plant? Does not really matter that those trees are the main means of survival for hundreds of peasants? Or maybe democracy is about Islamic values being imposed on the most secular country in the Muslim world?